Bees for the honey

Cows for the milk

And, stocks for the dividends! 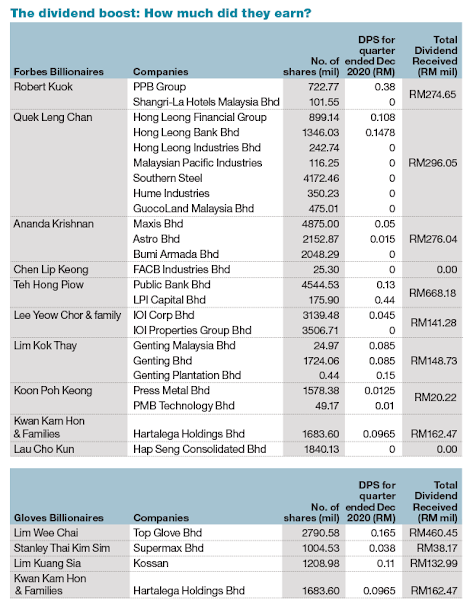 KUALA LUMPUR (March 18): Eight of Malaysia's top 10 richest tycoons — based on Forbes' 2020 billionaires list — earned a whopping RM1.99 billion worth of dividends from the recently announced financial results for the quarter ended Dec 31, 2020, based on their known shareholdings in Bursa Malaysia-listed firms.

Among them, Public Bank Bhd founder Tan Sri Dr Teh Hong Piow is expected to receive the biggest dividend payout totalling RM668.18 million from his shareholdings in the bank and insurer LPI Capital Bhd.

Teh holds a 22.78% stake in Public Bank through his private investment vehicle — Consolidated Teh Holdings Sdn Bhd. He has another direct stake of 0.64%.

LPI Capital, meanwhile, announced a second interim dividend of 44 sen per share for its 4QFY20, which amounted to a payout of RM175.3 million. Based on Teh's 44.15% stake in the company, his share of the dividend payout will be about RM77.39 million.

After Teh is Hong Leong Group's Tan Sri Quek Leng Chan, who is estimated to get RM296.05 million worth of dividends through his holdings in Hong Leong Financial Group Bhd (HLFG) and Hong Leong Bank Bhd (HLB).

Next is telecommunications tycoon T Ananda Krishnan, who will receive RM276.04 million from his stake in Maxis Bhd and Astro Malaysia Holdings Bhd. Ananda is the largest shareholder in Maxis with an indirectly held 62.34% stake. In Astro, he holds an indirect stake of 41.29%.

Ananda also holds a 34.86% stake in Bumi Armada Bhd, Asia's biggest offshore supporting vessel operator. The company, however, did not declare any dividends in 2020.

Robert Kuok's dividend cheque from PPB Group Bhd for the final quarter of last year is estimated to be RM274.65 million — the fourth highest sum among the ultra-rich.

PPB Group announced a dividend of 38 sen, comprising a final dividend of 22 sen and a special payout of 16 sen, in its 4QFY20 ended Dec 31, 2020. Kuok holds a 50.81% stake in the diversified conglomerate through his private investment vehicle, Kuok Brothers Sdn Bhd. He also holds a stake in Shangri-La Hotels (Malaysia) Bhd, though the latter did not declare any dividends for its FY20.

The fifth largest dividend gainer among the top 10 Malaysian billionaires is the founder and chairman of Hartalega Holdings Bhd, Kuan Kam Hon, who received RM162.47 million from the rubber glove maker, which recently announced a record high net profit of RM1 billion, and a second interim dividend of 9.65 sen for its 3QFY21 ended Dec 31, 2020, which was paid in February.

Based on the latest bourse filings, Kuan holds a direct interest of 0.795% in the group and a 48.32% indirect interest via Hartalega Industries Sdn Bhd. The glove manufacturer recently announced a record high net profit of RM1 billion for its 3QFY21 ended Dec 31, 2020 and declared a second interim dividend of 9.65 sen.

Next comes gaming tycoon Tan Sri Lim Kok Thay, who likely earned RM148.73 million in dividends from his shareholdings in the Genting group of companies listed on Bursa, despite the group facing challenges in operating its casino and resorts amid the pandemic.

This is based on the RM146.54 million Genting Bhd paid to Kok Thay's private investment company, Kien Huat Realty Sdn Bhd, and the dividends declared by Genting Plantations Bhd and Genting Malaysia Bhd.

Two of the top 10 tycoons, however, did not appear to have gained any dividend payments from their shareholdings in Bursa-listed companies. They are gaming tycoon Tan Sri Chen Lip Keong and Tan Sri Lau Cho Kun, the largest shareholder in Hap Seng Consolidated Bhd.

Though not on the list of Malaysia's top 10 richest tycoons based on Forbes 2020 list — which was published in March 2020 — Top Glove Corp Bhd's founder and executive chairman Tan Sri Dr Lim Wee Chai earned about RM460.45 million in dividend in end-2020, thanks to the interim dividend of 16.5 sen that the world's largest rubber glove maker declared in its 1QFY21 ended Nov 30, 2020.

The group also announced an interim dividend payment of 25.2 sen per share for its 2QFY21 ended Feb 28, 2021, payable on April 6 this year. Based on the announcement, Wee Chai stands to gain another dividend payout of RM710.12 million before mid-2021.

That means just for the first two quarters of Top Glove's FY21, Wee Chai has accumulated a total of RM1.17 billion in dividends, based on his total shareholdings of 35.22% in Top Glove, comprising a direct stake of 26.56% and an indirectly held stake of 8.65%.

Including Kwan, the billionaires from the big four glove makers on Bursa earned RM794.07 million worth of dividends in end-2020, as their companies' earnings continued to scale new highs following the surge in glove demand amid the Covid-19 outbreak.

Posted by investbullbear at 12:46 No comments: