The lockdown only buys us time: to really defeat the virus we need mass testing now

Instead of endless mass isolation or just waiting for a cure, the UK needs a data-driven, targeted approach to coronavirus testing 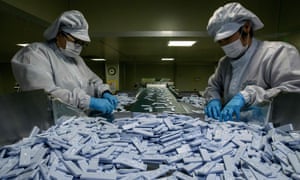 ‘SD Biosensor, a company in South Korea, is making 350,000 test kits a day, but it is prioritising the US, United Arab Emirates and Indonesia.’ Photograph: Ed Jones/AFP via Getty Images


After squandering valuable time to prepare for the spread of Covid-19 in February and the first half of March, the government made a dramatic U-turn and put the country into lockdown two weeks ago. But amid the drama of shutting down our entire way of life – with kids out of school, shops closed and millions working from home – we appear to have forgotten that lockdown itself is not the solution to coronavirus. It is simply a means of slowing its spread and buying time – while we race to catch up.

The real question facing Britain now is how to most effectively make up for lost time: what can we really do to fight this instead of simply cowering in our homes and waiting for it to blow over? If things carry on much as they are now, one possible scenario is that we will find ourselves in an endless cycle of lockdown and release over the next year – while the population slowly acquires the virus and hopefully gains immunity.

From Chinese data reported to the World Health Organization, we estimate that

Therefore, the challenge for the government (in the absence of a vaccine or treatment) is to ensure that healthcare capacity is not overwhelmed; that while the virus is transmitted throughout the population, the 19% who require either hospitalisation or an ICU bed are able to access that care and survive.


The burden on the NHS will be tremendous, especially given concerns about lack of appropriate personal protective equipment, and this will have knock-on effects on other services it offers: routine surgery, cancer treatment, the ability to deal with emergencies such as heart attacks and strokes. The decision whether to extend lockdown will be made by looking at

In an optimistic version of the above, over the next three to four months an antiviral therapy would be discovered while we hold out for a vaccine. Antiviral therapies would give doctors an additional tool to treat critical patients with, while vaccines would provide a prevention measure so individuals can build up immunity and the necessary antibodies before being exposed to Sars-CoV-2, the virus that causes Covid-19. Effective therapies have helped with how we deal with HIV/Aids (antiretrovirals), malaria (antimalarials) while vaccines have been effective against measles, mumps and rubella. Repurposing a drug that has already been tested for safety in humans would be the quickest path, and clinical trials are taking place for antimalarial cocktails (chloroquine and hydroxychloroquine), remdesivir and plasma therapies, which involve extracting antibodies from recovered patients and injecting them into ill patients.


The endgame would be a vaccine that is widely available, effective and affordable. Currently there are about two dozen vaccine candidates, with several being tested on animals and one imminently due to begin testing on humans. However, time is the problem, as vaccines require three phases of clinical trials to test for safety, side effects and whether they actually work. It will take about a year to 18 months even if all goes to plan – and even then, given all countries would be looking to acquire the vaccine, manufacturing enough of it would present a further challenge.

But instead of quarantining the entire population (and assuming anyone could be carrying the virus), the most pragmatic way out would be via a more nuanced and data-driven approach of mass-testing 75-100,000 people per day. This would not be testing random people but rather those presenting with symptoms, and then tracing all of their contacts (household members, colleagues, flatmates) to ensure they are also tested. All those who are virus-carriers would be put into a mandatory two-week quarantine in their homes, enforced through tracking and fines. This will allow the public health community to identify where exactly the virus is, to break further chains of transmission and to keep case numbers low and within the NHS capacity limit. It would also allow most of society, and the economy, to continue on a somewhat more “normal” basis.


The testing capacity could be built up through using private and university labs, as well as working with South Korea and other partners to bring in rapid diagnostics as quickly as possible. SD Biosensor, a company in South Korea, is making 350,000 test kits a day and is scaling up, but currently is prioritising the US, United Arab Emirates and Indonesia. When a reliable antibody test is available, one that shows whether someone has had it or not, individuals with high likelihood of exposure should be tested to see what percentage of immunity has built up and ensure they can be kept in the workforce.

If we want to work towards the best-case scenario, then we need to

Through this path we can start quarantining only those carrying the virus, and not the entire population. The economy, society and health all win in this plan, and it seems the best way out of our current situation.

Email ThisBlogThis!Share to TwitterShare to FacebookShare to Pinterest
Labels: Covid-19