Is Inflation Good for Stocks? 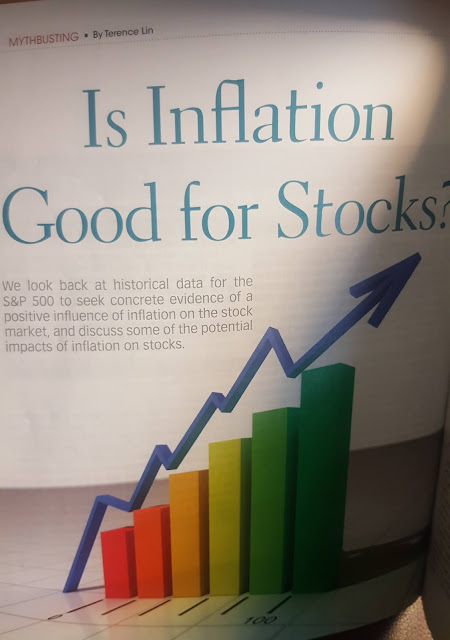 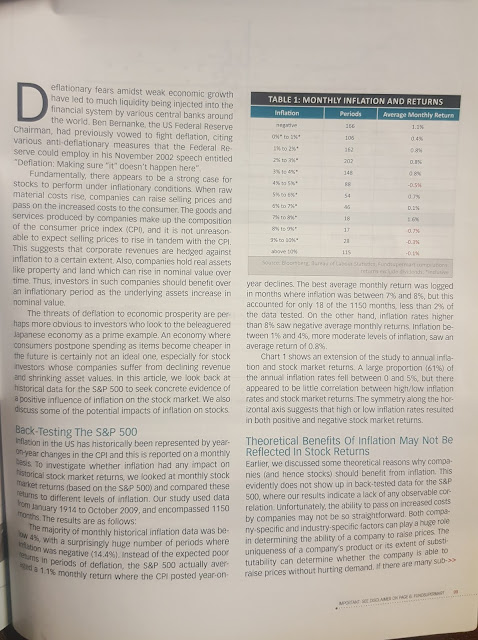 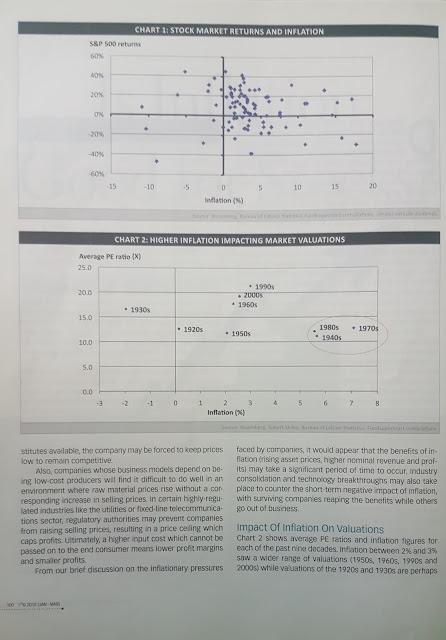 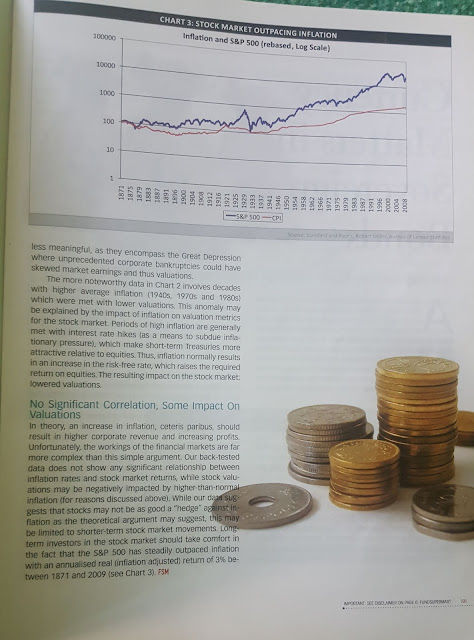 Conclusions:
Back-tested data does not show any significant relationship between inflation rates and stock market returns.
Stock valuations may be negatively impacted by higher-than-normal inflation (due to increase in the risk-free rate which makes short-term Treasuries more attractive relative to equities).
Stocks may not be as good a "hedge" against inflation as the theoretical argument may suggest, this may be limited to SHORTER-TERM stock market movements.
LONG-TERM investors in the stock market should take comfort in the fact that the S&P 500 has steadily outpaced inflation with an annualised real (inflation adjusted) return of 3% between 1871 and 2009.
Notes:
1.  Deflationary fears amidst weak economic growth have led to much liquidity being injected into the financial system by various central banks around the world.
2.  Motto:  "Deflation:  Making sure "it" doesn't happen here."
3.  Fundamentally, there appears to be a strong case for stocks to perform under inflationary conditions.
4.  The threats of deflation to economic prosperity are perhaps more obvious to investors who look to the beleaguered Japanese economy as a prime example.
Back-Testing the S&P 500
Monthly historical inflation and stock market returns
1.  Inflation in the US has historically been represented by year-on-year changes in the CPI and this is reported on a monthly basis.
2.  We looked at monthly stock market returns based on the S&P 500 and compared the historical stock market returns to different levels of inflation.
3.  The majority of monthly historical inflation data was below 4%, with a surprisingly huge number of periods where inflation was negative (14.4%).
4.  Instead of the expected poor returns in periods of deflation, the S&P 500 actually averaged a 1.1% monthly return where the CPI posted year-on-year declines.
5.  The best average monthly return was logged in months where inflation was between 7% and 8%, but this accounted for only 18 of the 1150 months, less than 2% of the data tested.
6.  On the other hand, inflation rates higher than 8% saw negative average monthly returns.
7.  Inflation between 1% and 4%, more moderate levels of inflation, saw an average return of 0.8%.
Extension of the study to annual inflation and stock market returns.
1.  A large proportion (61%) of the annual inflation rates fell between 0 and 5%.
2.  There appeared to be little correlation between high/low inflation rates and stock market returns.
3.  The high or low inflation rates resulted in both positive and negative stock market returns.
Theoretical Benefits of Inflation May Not be Reflected in Stock Returns
This evidently does not show up in back-tested data for the S&P 500, where our results indicate a lack of any observable correlation.
Why?
1.  Both company specific and industry-specific factors can play a huge role in determining the ability of a company to raise prices.
2.   The uniqueness of a company's product or its extent of substitutability can determine whether the company is able to raise prices without hurting demand.  If there are many substitutes available, the company may be forced to keep prices low to remain competitive.
3.  Companies whose business models depend on being low-cost producers will find it difficult to do well in an environment where raw material prices rise without a corresponding increase in selling prices.
4.  In certain highly regulated industries like the utilities or fixed-line telecommunications sector, regulatory authorities may prevent companies from raising selling prices, resulting in a price ceiling which caps profits.
5.  Ultimately, a higher input cost which cannot be passed on to the tend consumer means lower profit margins and smaller profits.
6.  Recognizing the inflationary pressures faced by companies, it would appear that the benefits of inflation (rising asset prices, higher nominal revenue and profits) may take a significant period of time to occur.
7.  Industry consolidation and technology breakthroughs may also take place to counter the short-term negative impact of inflation, with surviving companies reaping the benefits while others go out of business.
Impact of inflation on valuations
1.  Inflation between 2% and 3% saw a wider range of valuations over the past nine decades (1950s, 1960s, 1990s and 2000s).
2.  Valuations of the 1920s and 1930s are perhaps less meaningful, as they encompass the Great Depression where unprecedented corporate bankruptcies could have skewed market earnings and thus valuations.
3.  More noteworthy are the decades with higher average inflation (1940s, 1970s and 1980s) were met with lower valuations.  How can this anomaly be explained by the impact of inflation on valuation metrics for the stock market?
-  Periods of high inflation are generally met with interest rate hikes (as a means to subdue inflationary pressure), which make short-term treasuries more attractive relative to equities.
-  Inflation normally results in an increase in the risk-free rate, which raises the required return on equities.
-  The resulting impact on the stock market lowered valuations.
Posted by investbullbear at 08:09