A Lost Decade for U.S. Stocks

I came across two charts that show the dismal performance of U.S. equities in this decade. The first chart below is from the Numbers column in the latest issue of Bloomberg Businessweek. It shows the return of the S&P 500 Index from Dec 31, 1999 through Dec. 14, 2009. The S&P 500 lost 23% in this period. During the same period market indices in developed countries like France, Finland, etc. showed relatively better performance. The main stock market indices in the Netherlands, Japan and Greece performed worse than the S&P 500.
It is interesting to note that while the S&P lost 23%, the Brazilian Bovespa Index gained an astonishing 318% during the same time frame. This is one reason why US investors should look beyond the US for better returns.
click to enlarge 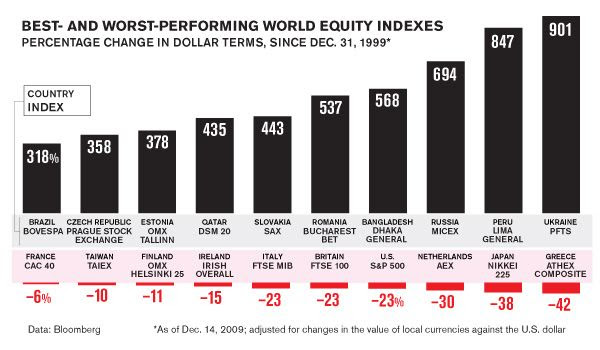 Source: Bloomberg BusinessWeek
The second chart is from a Wall Street Journal December 20th article titled “Investors Hope the ’10s Beat the ‘00“. From the article:

“The U.S. stock market is wrapping up what is likely to be its worst decade ever.
In nearly 200 years of recorded stock-market history, no calendar decade has seen such a dismal performance as the 2000s.
Investors would have been better off investing in pretty much anything else, from bonds to gold or even just stuffing money under a mattress. Since the end of 1999, stocks traded on the New York Stock Exchange have lost an average of 0.5% a year thanks to the twin bear markets this decade.
The period has provided a lesson for ordinary Americans who used stocks as their primary way of saving for retirement.
Many investors were lured to the stock market by the bull market that began in the early 1980s and gained force through the 1990s. But coming out of the 1990s—when a 17.6% average annual gain made it the second-best decade in history behind the 1950s—stocks simply had gotten too expensive. Companies also pared dividends, cutting into investor returns. And in a time of financial panic like 2008, stocks were a terrible place to invest.
With two weeks to go in 2009, the declines since the end of 1999 make the last 10 years the worst calendar decade for stocks going back to the 1820s, when reliable stock market records begin, according to data compiled by Yale University finance professor William Goetzmann. He estimates it would take a 3.6% rise between now and year end for the decade to come in better than the 0.2% decline suffered by stocks during the Depression years of the 1930s.
The past decade also well underperformed other decades with major financial panics, such as in 1907 and 1893.
“The last 10 years have been a nightmare, really poor,” for U.S. stocks, said Michele Gambera, chief economist at Ibbotson Associates.”
Chart - U.S. Stocks’ Cumulative Returns by Decade
“This decade is on pace to be the worst period ever for owning stocks. On the right are the annual returns, by year and decade, for a broad measure of stock-ownership. Stock returns were even better during the Civil War and World War I than from 2000 to 2009.” Email ThisBlogThis!Share to TwitterShare to FacebookShare to Pinterest
Labels: lost decade, US economy