For every 10 Singaporeans you meet more than one will be a millionaire of USD.

Singapore and Malaysia
The Boston Consulting Group, one of the leading global management consulting firm has just last week released its Annual Wealth Report and found Singapore to be amongst the top 20 countries with the most millionaires households.
Singapore, (once a part of Malaysia) is a tiny nation of 5.1 million population is ranked at no. 18 with the most numbers of millionaires and rank the highest in terms of density with 11.4 percent of the total households being a millionaire in USD (US Dollar). That is about 3.3 million Malaysian Ringgit. And this is of liquid asset which does not include the value of property owned. 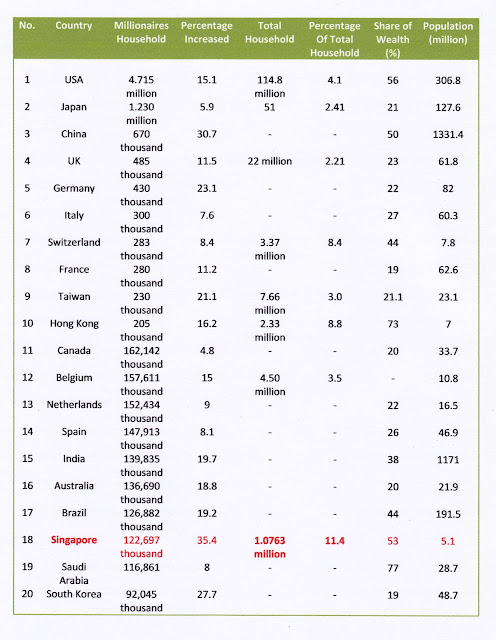 (Most Millionaires Countries)
That means for every 10 Singaporeans you meet more than one will be a millionaire of USD.
Malaysia? of course is not in the list but i will try to check the most corrupt millionaire household list, maybe we are there.
As i remembered in the late 70s to early 80s before Mahathir became PM, Malaysia has one of the highest per capita income in Asia and was way ahead of countries like South Korea and Taiwan.
The Singapore dollar exchange rate was at parity with the Malaysian dollar back than at 1 for 1 and after Mahathir became PM we saw the other Asian countries race way ahead and today the Singapore exchange rate is at about RM2.33 for one Singapore Dollar.The Hong Kong dollar back than was about 3 for one Ringgit.
Singapore is today a fully developed country and an advanced nation  of which Malaysia is only still aspiring to become. Singapore enjoys a per capita income of more than USD 37 thousand whereas Malaysia is at less than USD 7 thousand which is way way off the mark being a leader in the region some 30 years ago.
Singapore is the fourth leading financial centre of the world and the fourth richest nation in terms of GDP Purchasing Power Parity per capita.
Singapore is a fine example of a sound and efficient economic management and governance with one of the highest ratings by Transparency International for being clean and the least corrupt.
On the other hand Malaysia will show you how corruption can impoverished its people and after years of progressive corruption has now become terminal and rotted to the core. Malaysia is now a sad story although blessed with rich and abundant natural resources, has 57.8% of its total household of 5.7 million earning a meager income of below 3000 Ringgit a month with an average household size of 4,5 person per household. And more than two third of the Malaysian household earns less than RM4 thousand a month at 70.7%. 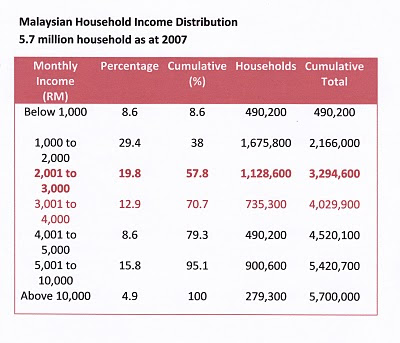 (Click on Image to Enlarge)
We could have been like Singapore and we would have been a prosperous nation only if than we had selected our leaders wisely and carefully but instead we had to pick the most wicked and corrupt that has plundered our resources and divided our spirits.

The recently announced 10th MP confirmed the demise of the NEM and the continuation of pre-existing policies.  This does not bode well for the future.  As a prudent and frugal investor, your asset allocation should be 90% foreign and 10% local.
Posted by investbullbear at 07:45