Warren Buffett is widely regarded as one of the most successful investors of all time. Yet, as Buffett is willing to admit, even the best investors make mistakes. Buffett's legendary annual letters to his Berkshire Hathaway (BRK-A) shareholders tell the tales of his biggest investing mistakes.

There is much to be learned from Buffett's decades of investing experience, so I have selected three of Buffett's biggest mistakes to analyze.

In 2008, Buffett bought a large stake in the stock of Conoco Phillips (COP) as a play on future energy prices. I think many might agree that an increase in oil prices is likely over the long term and that Conoco Phillips will likely benefit. However, this turned out to be a bad investment, because Buffett bought in at too high of a price, resulting in a multibillion-dollar loss to Berkshire. The difference between a great company and a great investment is the price at which you buy stock, and this time around Buffett was "dead wrong." Since crude oil prices were well over $100 a barrel at the time, oil company stocks were way up.


It's easy to get swept up in the excitement of big rallies and buy in at a prices that you should not have -- in retrospect. Investors who control their emotions can perform a more objective analysis. A more detached investor might have recognized that the price of crude oil has always exhibited tremendous volatility and that oil companies have long been subject to boom and bust cycles.


Buffett says: "When investing, pessimism is your friend, euphoria the enemy."


U.S. Air
Mistake: Confusing revenue growth with a successful business
Buffett bought preferred stock in U.S. Air (LCC) in 1989 -- no doubt attracted by the high revenue growth it had achieved up until that point. The investment quickly turned sour on Buffett, as U.S. Air did not achieve enough revenues to pay the dividends due on his stock. With luck on his side, Buffett was later able to unload his shares at a profit. Despite this good fortune, Buffett realizes that this investment return was guided by lady luck and the burst of optimism for the industry.


As Buffett points out in his 2007 letter to Berkshire shareholders, sometimes businesses look good in terms of revenue growth but require large capital investments all along the way to enable this growth. This is the case with airlines, which generally require additional aircraft to significantly expand revenues. The trouble with these capital-intensive business models is that by the time they achieve a large base of earnings, they are heavily laden with debt. This can leave little left for shareholders and makes the company highly vulnerable to bankruptcy if business declines.


Buffett says: "Investors have poured money into a bottomless pit, attracted by growth when they should have been repelled by it."


Dexter Shoes
Mistake: Investing in a company without a sustainable competitive advantage

In 1993, Buffett bought a shoe company called Dexter Shoes. Buffett's investment in Dexter Shoes turned into a disaster because he saw a durable competitive advantage in Dexter that quickly disappeared. According to Buffett, "What I had assessed as durable competitive advantage vanished within a few years." Buffett claims that this investment was the worst he has ever made, resulting in a loss to shareholders of $3.5 billion.


Companies can only earn high profits when they have some sort of a sustainable competitive advantage over other firms in their business area. Wal-Mart (WMT) has incredibly low prices. Honda (HMC) has high-quality vehicles. As long as these companies can deliver on these things better than anyone else, they can maintain high profit margins. If not, the high profits attract many competitors that will slowly eat away at the business and take all the profits for themselves.


Buffett says: "A truly great business must have an enduring "moat" that protects excellent returns on invested capital."

While making mistakes with money is always painful, paying a few "school fees" now and then doesn't have to be a total loss. If you analyze your mistakes and learn from them, you might very well make the money back next time. All investors, even Warren Buffett, must acknowledge that mistakes will be made along the way. 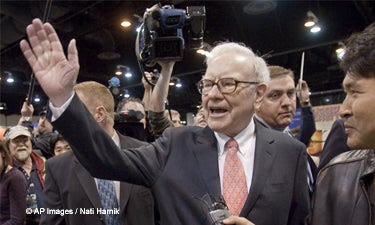 Read: The Buffett Philosophy
The Buffett Philosophy
Warren Buffett is a proponent of value investing, which looks to find stocks that are undervalued compared to their intrinsic value. Financial metrics like price/book (P/B), price/earnings (P/E), return on equity (ROE) and dividend yield carry the most weight on the Buffett scales. In addition, he seeks out companies that have what he calls "economic moats" - high barriers to entry for a competitor who may wish to invade the market and erode profit margins.
The Bottom Line 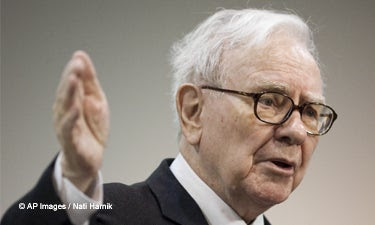 There's no shame in being a coattail investor, especially when that coat belongs to Warren Buffett. While all stock investing comes with some risk, a basket of these six stocks is a diversified way to participate in an economy that is by all accounts growing after the worst recession in decades. These market leaders have high barriers to competition, are fairly priced and, regardless of what short-term stock prices say, should deliver long-term value to shareholders. As Buffett himself said, in the short term the market is a voting machine, in the long term, it is a weighing machine. Buffett has an uncanny ability to pick the stocks with the greatest potential for growth, ensuring that the profit scale will always tip in his favor.