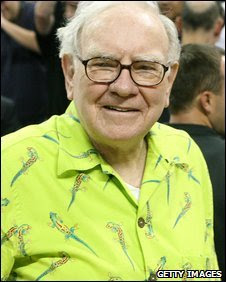 Warren Buffett is different from the rest of the super-rich in many ways, large and small.

He makes investment sound simple and has a talent for explaining it to the public.

But, as his biographer, Alice Schroeder says in BBC Two's 'The World's Greatest Money Maker: Evan Davis meets Warren Buffett', his method is "simple, but it's not easy".

There's more to the billionaire investor than meets the eye. However simple he'd like to make earning $40bn (£25bn) look, the Buffett story isn't entirely straightforward.

Here are 10 paradoxes that could offer an insight:

2. Mr Buffett uses a conservative approach to picking investments - "don't lose money" is one of his favourite rules. But much of his cash comes from insurance companies that specialise in very high risk events - catastrophe insurance.

3. Mr Buffett is famous for his analytical study of the figures and unemotional response to the market. And yet among his greatest assets are his personality and reputation - both unquantifiable - and the trust they engender in potential business partners.

4. Extremely cautious with money, Mr Buffett is nevertheless happy to make "big bets" when he likes a company or a share. Unlike most investors, he believes that, for professionals at least, diversifying one's investments only means including among them, second rate choices.

5. He has come a long way in his life, but still lives within a mile or two of where he was born.

6. Mr Buffett has made more money than almost everyone, but appears to have no use for it personally - except for the single indulgence of his private jet, which he called "The Indefensible".

7. The most acquisitive man in the world is also one of the most philanthropic. Three years ago, Mr Buffett announced he was giving away the bulk of his fortune to charity, including $31bn (£19bn) to the Bill and Melinda Gates Foundation.

8. Mr Buffett says he has "no strategy" for Berkshire Hathaway, and yet he puts endless time and energy into communicating his ideas about markets and how to run businesses.

9. The man who is famous for a simple, down-to-earth approach to money-making has been chairman of investment bank Salomon Brothers, has a huge investment in another, Goldman Sachs, and trades in currency and derivatives.

10. Mr Buffett is one of the world's best-known business people, and yet he has no use for marketing or promotion of his business, Berkshire Hathaway.

Email ThisBlogThis!Share to TwitterShare to FacebookShare to Pinterest
Labels: Buffett